You're a Little Bit Better and Ready for Some Celebration

Once as a kid I got a stomach bug over Christmas break. This was the same year my cousin Auggie made batches and batches of Chex Mix. It made my grandma's whole house smell like roasted Worcestershire sauce. I had never had Chex Mix before, and the whole family sang its salty praise. I desperately wanted to nibble even one of those checked cereal squares but my little belly was not accepting anything, let alone seasoned snack mix. To this day, a whiff of homemade Chex Mix still smacks of sickness, sadness, and feeling left out.

This year I am starting Christmas break with the flu. Initially, I felt grumpy that my first day off consisted of aches, fever, and restless sleep. Then I felt miserable and lethargic, unable to muster enough energy to get dressed. Finally, when my lethargy would not give way and I had to miss my work holiday party, I felt very sad and lonely. Missing out again. I pouted pathetically.

As the TMBG lyric “The after party has been moved to your house, to your house,” played in my head, I dared not speak my wishes lest they sounded more far-fetched outside of my head than they did in. But just when I thought the window of possibility had come and gone, the doorbell rang. My spirit leapt, casting lethargy aside. From the front hall I heard Jen say to Matt, “We don't have to come in...” “Come in! Come in!” I stuffy-headedly squealed from the couch, and there she and Kevin were in their fancy clothes handing me a plate of food, smiling, and remembering me. Their arrival seemed so natural and yet I could scarce believe the little cry of my heart had been answered. I thanked God for my very thoughtful friends and my little Christmas miracle, however seemingly small.
Posted by Rachel Dull at 9:52 AM No comments:

Best of 2013, a set on Flickr.
These are my favorite pictures of 2013 that were taken on my iPhone, and thus in one convenient folder from which to cull them. Clicking on a picture will take you to a bigger version and the whole set on the Flickr website.
Posted by Rachel Dull at 8:48 PM 2 comments:

Operation Pantry Purge did continue, despite my not blogging about it. My initial deadline was a bit too aggressive, but the spirit of the purge remains with me still (and has transferred to other areas of the house as well). Notable purges include:
This past weekend produced a highly successful general purge, and to kick it off, I worked on the hot drinks and candies shelf of the pantry. If you saw our tea collection, you might deduce, “Wow, these people really like tea! They must drink tea every day! There must be 100s of tea bags there!” and you'd be right, but only in your third assumption. If you conjectured “Wow, these people must really like variety in their tea selection. They must have trouble choosing. I bet they have a really messy tea shelf,” I think you'd be more correct. 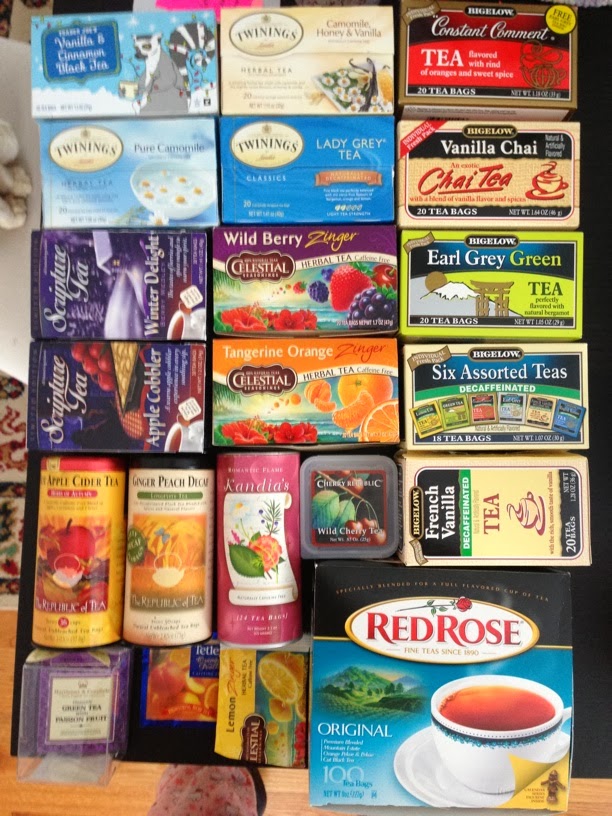 When I began thinking about how to deal with the toppling tea boxes problem, I researched buying a wooden tea box like they display for you at fancy restaurants. But it wouldn't quite hold the quantity of tea we had, wasn't cost effective, and many options wanted you to buy it full of tea already which would only make the problem worse long before it made it better. So I went looking down in the basement, that veritable treasure trove of clutter where our inner hoarders hide out, to see what storage options I might find. I returned to the pantry with a MacBook Air box, an unused stacking cannister set, and a child's play basket. With luck, the computer box comfortably sat 5 packaged teabags across, the cannister held a nearly full box-worth of loose tea bags, and the blue basket wrangled almost all of the tea odds and ends! I even found a nice colorful fabric piece to lay in the bottom of the box (which already had sticky squares in all four corners to hold it down). I won't see it unless we drink more of this tea, but you know, someday! 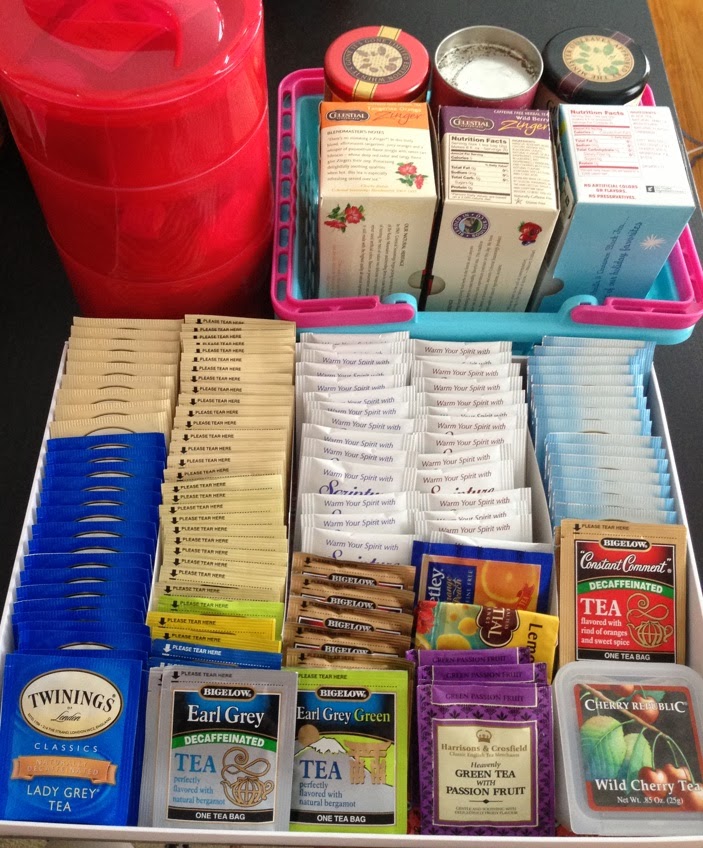 I refrained from actually counting the tea. Some metrics aren't worth the effort. :-)
Posted by Rachel Dull at 11:14 AM 1 comment:

Email ThisBlogThis!Share to TwitterShare to FacebookShare to Pinterest
Labels: OperationPantryPurge

Half your cake and eat it two

I dedicate this exercise in amalgamated idiomatic phrases to Becky, without whose influence this would have been more difficult, but under whose tutelage it was a piece of pie:

That moment when you realize your blog name abbreviates to 'TMI'

Does reading my blog make you feel like you know me? Do you feel like you know me better than I know you? You read my thoughts and ideas--maybe they even inspire your own--but I do not know that unless you tell me. For those who see me IRL, do you feel there is a disconnect between me on the blog and me in person? Do you wonder why I don't talk about some of the things I write about? Why do you even bother to read this drivel? Are you a voyeur, an admirer, a friend? Do you want me to read your blog?

I wish more people had blogs so I could know what they are thinking about. You might tell me that is facebook, or that is twitter, but it's not. Many people do not generate content containing their thoughts and ideas. They repost other people's ideas, tell me what they are watching/eating, or simply do not post at all. None of these are what they're actually thinking about, assuming everyone is actually thinking about something. I use many different social mediums to follow people I want to know about. If you don't post and if I don't get an opportunity to talk to you, I cannot know what you are thinking. If you only post pictures, I can begin to infer things about your life and what you like, but I guess I'm a words person, and I want to read a little bit of your journal.

Some people don't want to share their lives, or maybe they think they are not interesting enough to share. I think everyone is interesting enough to share at least a little bit, though many people share too much. Fortunately we don't have to follow everything everyone says. You know, I'm trying to make this your problem, but maybe it is my problem, because I don't call you, and because I don't talk to you. I am a passive person, I wait for you! I'm a good listener. Really good listeners ask a lot of questions, though. I'm probably only a so-so listener, but I'm getting better. Mostly I want to listen to you and be listened to by you, but only when I have good things to say. Sometimes I don't have anything good to say and I'd rather be quiet.
Posted by Rachel Dull at 9:26 AM 2 comments:

Thank you to all my friends and family for putting up with me again this year during the harrowing month of writing in November! Many of you accurately recalled which questions were on the ASK and DO NOT ASK lists, and when you asked about it I enjoyed boring you with details about how I wasn't doing it conventionally this year, but I was writing, and it was all crap, etc, etc. It is a blessing to have supportive friends like you to keep me remembering to take myself seriously!

This year I think I forgot how hard it is to write so much in so short a time-frame. I have been writing more consistently all year so I thought I would be warmed up and ready to go. Even doing it unconventionally (as in not just one single story), I still lagged behind in word count until the last week.

This year during NaNoWriMo I think I learned that all writing is going to feel crappy, unless it doesn't, in which case it is probably crap. No, that's not it. I relearned to turn off my internal editor and see what comes out unfiltered. I learned that sometimes I think up kind of boring stuff. I learned that I'm a fairly fast typer. I sort of knew that, and I still totally hit the backspace key a ton, but I can really crank out the words if I have something to say.

I also learned that I am still an incorrigible speller with a vocabulary list larger than the set of words I can occasionally accurately spell (both 'incorrigible' and 'occasionally' being on that list). I will type something out thinking it looks perfectly sensible with the vowels I have chosen, but then I get the telltale red squiggly line that tells me I am wrong. Some document programs offer me suggestions, but sometimes I have to keep trying until I get it right, or go to Google, which is generally quite good at figuring out my spelling faux pas. (You know I took French, but I'm not sure how to pluralize 'faux pas'. Maybe I shall Google that… Ah, spelled the same, but pronounced differently. Pronounced such that people would think you'd made it up, but you really knew and were correct.)

Now that all this deadlined writing is over, I think I'm going to have to take it easy in December to attend to my long list of other hobbies which hopefully include cleaning, washing dishes, and doing the laundry, as well as crafting, baking, and shopping.
Posted by Rachel Dull at 8:03 AM No comments: