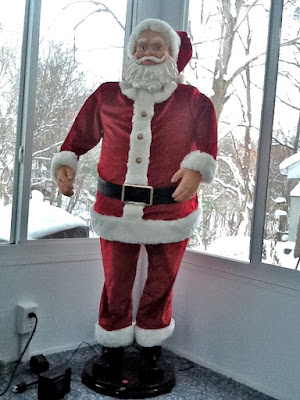 At half past 11, I snuck downstairs to filch the enormous sugar cookie with green frosting that my baby sister, Isabelle, had left out for Santa Claus. I had already poured myself a glass of fresh milk before heading into the living room, which was lit by the cozy Christmas tree lights we had left on so Santa could navigate the floor plan when he arrived. I paused in front of the twinkling beacon, holding the magic of Christmas in its ornament-laden boughs. It felt so peaceful in the tree’s halo that I sighed with contentment as I reached for the plate on the side table by the chair. My fingers had just curled around the wreath cookie waiting for me these past 4 hours when a commotion caused me to dropped the stolen goods and jump back in fear as a man’s voice bellowed out “Ho! Ho! Ho!” and a mechanized Santa began to sway his hips and dance to “Santa Claus is Coming to Town”.

I hardly knew a sound had escaped my lips, but my younger brother, sitting across the room with a video recorder trained on my every move, described it as the whinny of a horse crossed with the wheeze of our elderly grandfather when he gets out of bed. “Gotcha!” Davey called. I came out of my trembling crouch and recognized the horrible Santa mannequin that our mother had purchased once at a garage sale, and every year insisted on putting out on our front porch to greet holiday visitors who came to call. My brother, in his comedic wisdom, had relocated the devil for the express purpose of catching me in the act of stealing Santa’s cookie and giving me a fright. “Just wait until I show Isabelle!” he cackled, skipping past me, and swiping the cookie before heading back to his room.

As the robotic Santa finished his dance and clicked off, I stood there staring at an empty-but-for-crumbs plate illuminated in the glow of the tree that had lured me into a false sense of security with its angelic topper and glittery tinsel. After Isabelle saw that video, not even the large box I put under the tree with her name on it would win back her love. I drank my milk and pondered for a moment, then pulled a charred bit of wood from the fireplace and tucked it into Davey’s stocking with the following note: “Davey, I know you ate my cookie. I can’t take your presents back now, but consider this bit of coal a warning for next year. I’ll be watching. —Santa.” And then I tucked a special note into Isabelle’s stocking that said, “Dear Isabelle, your brothers mean well, they just make bad choices sometimes. Keep on loving them, just like I do, and they will come around. Don’t give up hope! Especially on Logan. He’s a good brother. Love, Santa.” That’ll teach Davey to mess with Santa, I thought, mechanized or otherwise.
Posted by Rachel Dull at 4:09 PM 4 comments: