I wrote this post a few months ago but was waiting to post it until I got a video edited. In lieu of learning how to edit videos, and in order to keep 2012 in 2012, here is now. :)

This year, I decided to participate in the Homecoming alumni band for the first time. As a band member in college, the alumni band was so not cool, and homecoming was my least favorite game of the year. I distinctly remember being annoyed at how the old people didn't hold their horns level, and looked ridiculous both attempting and deciding to forego marching traditional step onto the field. They sounded bad, dealing with all the extra people at rehearsal slowed things down and was boring, and they used flip folders for their music. What I didn't understand was how incredibly fun it is for them! You don't have to be in fine physical form, you don't have to memorize the music, you don't have to learn a marching show — you just show up and play! And if you're lucky, some of your old friends are also there to help you remember the silly cheers and relive everyone's most embarrassing moments in band.


Leading up to the weekend, my friend Julie and I were really worried we wouldn't be able to play because it had been so long. We exchanged emails about how we really should get out our horns and practice, and how we had expected to receive music by now. Walking into rehearsal on Friday, I was sure I'd made a mistake and I should leave. I'm not going to lie, that first rehearsal was a little rough. But a few runs through the traditional songs reminded me that (most of them) weren't so hard for 3rd Trumpet, and I could still play them and remember the horn moves at the same time.

Game day was awesome, and that's saying something because it rained all day! Rehearsal and marching to the stadium were a bit chaotic — not a word I have ever associated with band before — but once we played on the steps of the stadium for the assembled masses, it felt right, and I was delighted to be back.
In the tunnel leading onto the field before the game, Julie, Becky, and I wondered how we were supposed to line up for the pregame performance on the field, as no instructions had been issued. A fellow alum heard our ponderings and asked if it was our first time in the alumni band. We admitted yes. "It'll be fine," he said.
"But we don't remember what yard line we are supposed to end up on!" we said.
"It'll be fine," he repeated.
It was fine, but we looked awful!

He also said he'd been back for more Homecomings than for games he had marched in college. This thought gave me pause. As fun as it was, maybe return trips should be used sparingly over the years so as not to eclipse the actual event. Or maybe the whole point is to remember and preserve tradition through making new memories during frequent returns, because the memories are going to slip away anyway.


But for that next time, I'm going to eschew the idea of practicing my trumpet beforehand. It doesn't matter what you sound like. Instead, I should consider lifting weights to reengage those arm muscles needed to hold my horn up for 5 minutes straight during a song. For extra credit, I could try to rememorize in which order to play those 5 notes for any given traditional song (I heart 3rd part!).
I was surprised that I was not one bit nervous in the tunnel, which was a welcome departure from tradition! Before the physically demanding pregame performances in college, I would feel very nervous, which manifested itself in yawning and irrational, sudden fatigue. This time, I don't know if I forgot that I would be performing in front of a 100,000 people (probably fewer due to the weather, but I'm using science math (work joke)), or if I felt safely anonymous in the disorganized throng of alumni band members. The spectators are pretty far away, most of them don't care, and none of them have a clue what you're supposed to be doing either.

I was also surprised that so many of my non-band friends expressed that they were proud of me for participating. Fact: I have pretty great friends. But I had no idea I could elicit their pride by playing a trumpet poorly and "marching" in a disorganized mass across a football field. However, I am honored to have gratified them by my participation.

I wish you all an opportunity to partake in your own "homecoming" back to an event, place, or experience that meant a lot to you and feels like home because of the wonderful memories that still reside there. It is like watering the garden of memories that brighten the landscape of your soul.
Posted by Rachel Dull at 2:02 PM 1 comment:

A cookie can grow up to be anything! But no matter what they become, their careers all end the same... in my belly.

(Cookies decorated by Matthew, Jessica, and Rachel, respectively.)
Posted by Rachel Dull at 10:55 AM 2 comments: 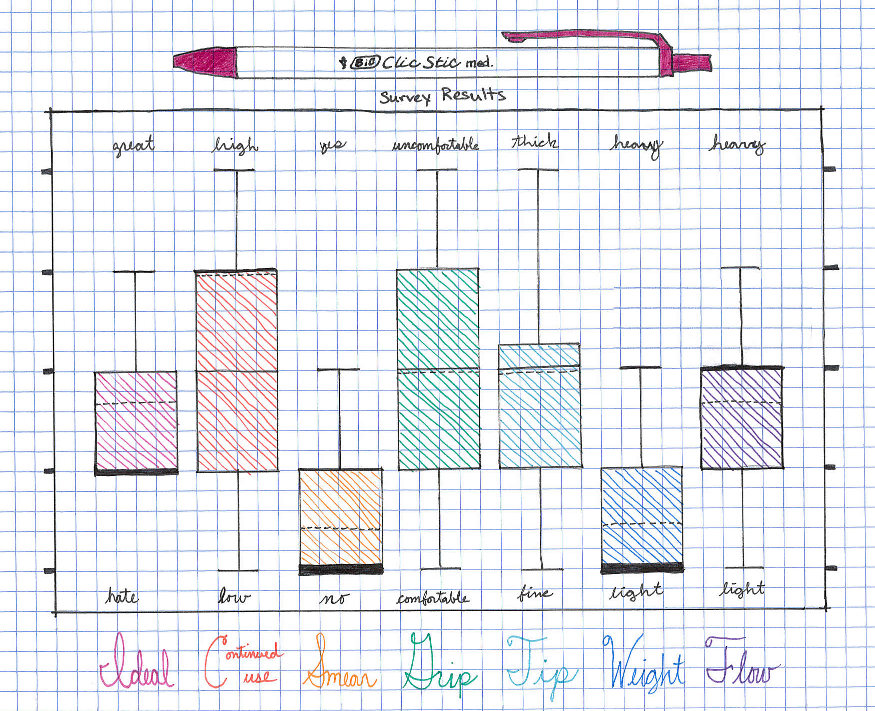 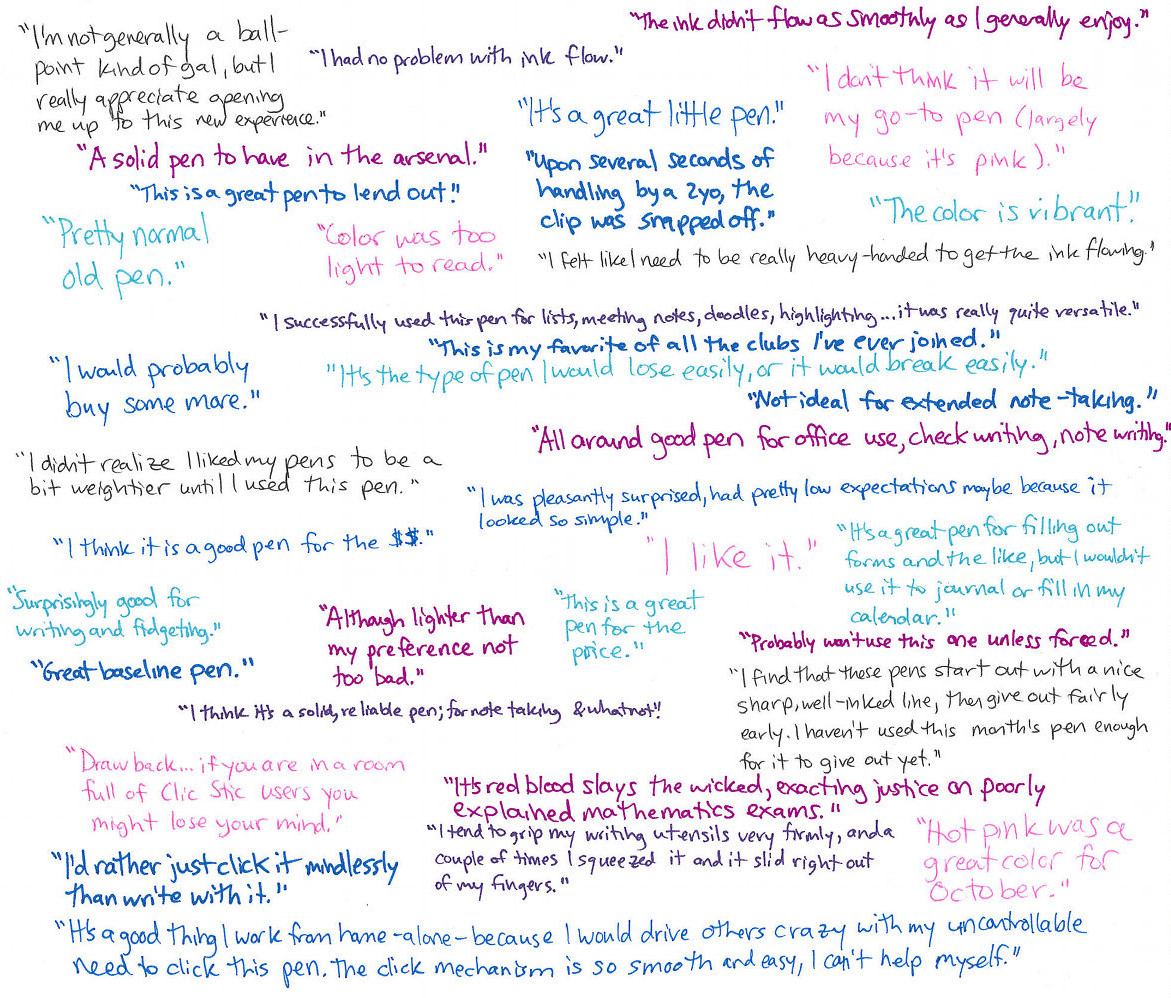 Best and Worst word clouds made with Wordle. Beautiful purple pen in last handwritten picture courtesy of my December Pen Pal, Becky! It's a Stabilo. I looooove the color. You will probably see more of it used in future pen club statistics!
Posted by Rachel Dull at 4:53 PM 1 comment:

In Which Many Things Are Power Lifted

The Annual Christmas Tree Procurement Excursion took place yesterday. It is a tradition that we go with our friends Becky & Andrew and Jessica & Brett to help them pick out trees, because for allergy reasons we do not get one ourselves.

It is also a tradition, started by Becky, to power lift the fresh cut tree:


Matt did, however, pick out the tree he would have chosen for the three-story foyer we don't have:


There were a lot of good trees to choose from this year, and Andrew found a tall one he liked fairly quickly. Jessica and Brett were a bit more choosy, but in the end found a great little tree with a good top that wasn't too big around the middle:


Per tradition, we then encouraged Brett to power lift the chosen tree:

Rose, not to be outdone, found her own tree to hold aloft:

Caught up in the spirit, suddenly everything was fair game for lifting:


Once that was accomplished, it was time to haul the trees back for shaking and binding:


And take them home:

We had fun! I was hoping to recreate the famous 2010 "Rose and the Rabbit of Terror" picture with Audrey, but she's still too small. Maybe next year. And then maybe the year after that with Jess's little one. It's good to have traditions!

Early Indicators of My Life to Come

I recently found a sheet of paper that I had begun to cover with lists, circa 1997 or 1998. It seems like maybe I was going to make a scrapbook or something because there are notes like “picture” or “draw” after some things. This was during an era when I used lined paper but didn't respect the margins or the lines. I remember thinking I was conserving paper? Let me be clear, though—the lines of writing are still parallel to the lines on the paper. Not diagonal or anything. There was method amidst my madness. Left brain and right brain each asserting themselves.

The following are a selection of the more amusing/notable lists, with my present day thoughts about them in [brackets]. It is amusing to see what is the same and what has changed since nearly half my life ago.

Addictions:
[These could have been so much worse, amiright?!]

Favorite Subjects:
[It wasn't until Math 285 (Honors Calc 3) that I realized math is hard, and I should be a Creative Writing major.]

Favorite Colors:
[destined to be a Michigan Wolverine]

[Redacted, or rather omitted and saved for a future post. There is just too much to analyze there!]

[Redacted to protect the relationships I currently have with the people who didn't make the list!]

Future Plans:
[Check and check! But perhaps this lack of vision explains why my 20s were so directionless.]