The thing about the last 1000 words or so is that you can’t wait to be done. You want to cash in your chips and call it close enough. But that word count validator is a binary thing: you either have the 1000 words or you don’t.

NaNoWriMo is a feat of strength more than anything skill-based. It’s a test and exercise of will power, and an opportunity to find out what you’re willing to give up in order to stick to this arbitrary goal. I do it to maybe find a new story to tell, but mostly I do it to teach myself how to just do it. Can it be that writing is more practice than actual performance? Surely, as it is the same with playing a musical instrument. Many thousands of words and hours go into learning how to write, and streamlining the story, and even hitting the keys quicker so that when the story is unspooling as fast as a dropped spool of thread bouncing and rolling across a hardwood floor, you can keep up with it and get it all down. (I’m still working on writing analogy—need a lot more practice there!)

I would be remiss if I didn’t thank you for being patient with me while I went through this intensive training period again this year. Patient while you listened to me spout off about what I was writing or the writing process. Patient while you waited for another blog post to show up (if you’re one of those two people who prefer not to use RSS feed readers). Patient while I stressed out and whined about being behind on my word count, which I was the entire month until the end. I tried not to sound like I wasn’t enjoying it. Sometimes it helps to recognize that it is hard even if I am pretty sure I’m going to finish successfully.

I’m excited that it’s about to be over for another year, though, just as soon as I compose 600 more words in some medium or another. I’m not a stickler for all 50,000 of my words being part of the same story arc. As long as they are part of composed sentences that took some thought and effort to produce, I’m cool with counting them. This year among my 50,000 words are a little bit of poetry, a Christmas newsletter I may or may not send out once I have time, and this blog post. In the past I have even counted long emails if they were written to convey ideas requiring more thought that reporting on the status of the weather. The only downside to putting forth effort to write long emails and Christmas newsletters and blog posts during NaNoWriMo is that I have to turn the inner editor back on a least a little bit for the sake of the reader of that particular set of words. For the bulk of the story writing for NaNoWriMo, the inner editor only gets nominal input while the words are spurting forth from my fingertips onto the screen (if I haven’t finished the sentence yet, sometimes I’ll allow myself to change a few of the words or backspace it entirely).

I’ve still got just under 400 more words to go and it would feel abusive to my readership if I rambled on just to get the word count. So I’ll try to come up with a little story. Forgive me if I end mid-sentence, though, because when I reach 50,000 words I’m likely going to stop and have a little dance break. If you want to join along when I get there, I’m planning on playing They Might Be Giants’s Dr. Worm, or maybe Weezer’s My Name is Jonas. Oh, or maybe some Adele because I’ve fallen under her spell again. Anyway, I said I wouldn’t ramble so here goes:


“If I get hit by a bus, I just want you to be able to figure out how to run the timesheet reports. That’s why I’m explaining this to you now,” Michelle said, closing a file on her computer and folding her hands together on her desk. “Does that make sense?”
“If you get hit by a bus, I don’t think anybody will care about the timesheet reports because we’ll be too busy mourning your tragic death,” I said.
“Wow, I didn’t say the bus was going to kill me,” she said. “I just meant if I wasn’t in to work for a while, somebody should know how to do this.”
I was pretty sure the odds of getting hit by a bus and living to run the timesheet reports again in the future were pretty small, but I let it slide by saying, “Okay, thanks. Let’s hope I never have to run it without you.”
“Come on, it’s not that bad. You just have to make sure you deselect “Other” first, and then type everybody’s names in correctly before hitting the ‘compile’ button. It only takes about 30 minutes for it to run. You can do it,” Michelle said, going through the motions on her computer again.
I sighed. “It’s not that it seems hard, I’m just saying, I hope I don’t have to do it because I hope you’re not incapacitated, decapitated, or otherwise unable to do it yourself.”
Michelle frowned, “Thanks, I guess, but you don’t have to be so morbid about it.”

Gah!! Here’s the thing about NaNoWriMo and word counts: every program counts words differently. I’m not sure what the nuances are, I just know that when I went to validate my text on the official NaNoWriMo website, it said I needed 97 more words. I knew this, see, so I wrote until I had 50,104 words in my writing program, figuring it would cover me, but when I exported it to Word, I only had 49,922 words, and when I pasted it into the official word count validator website for NaNaWriMo, I only had 49,903! The algorithms are apparently grossly different! But, never fear, this paragraph will seal the deal. :) 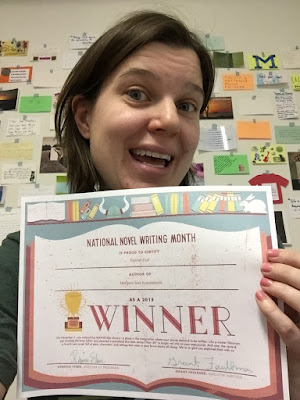