The face of Dominion

Lots of our friends play Dominion, so while we don't own the game ourselves (no need—everybody we would play with already has it!), we still felt qualified to recommend it to my sister and brother-in-law. 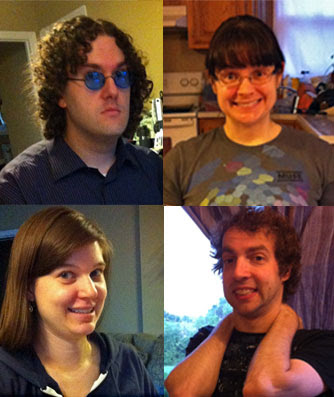 This, apparently, is the face you make when you're waiting nervously for your next turn, hoping that the strategy you've chosen is going to secure your dominance!

For a review of rules and game play, read my friend Mike's review of Dominion for AnnArbor.com. What follows is my own lessons learned and advice:

Remember the peafowl I videoed? That was one of the 3 sons of the peacock family that hangs out in my sister's backyard. The portrait below is of the father with one of his offspring. You can tell which one is the father because HE'S THE ONE THAT GOT ATTACKED BY A DOG AND LOST HIS TAIL FEATHERS! 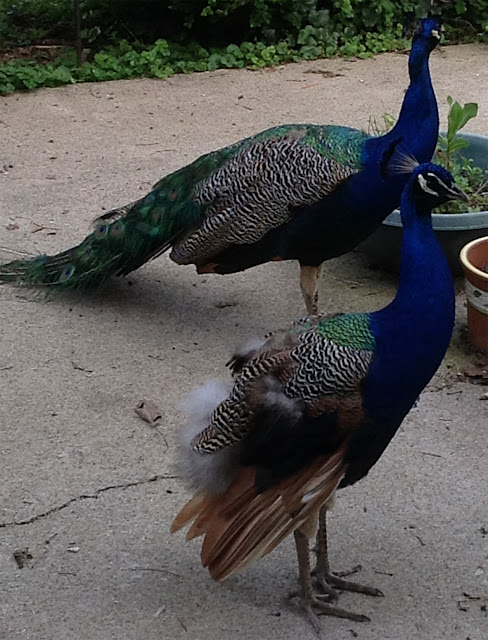 My sister says his tail was the most beautiful of them all, and now he is ashamed and tries to hide. The internet tells me that peacocks molt at the end of every summer and then grow their feathers back, so fortunately Mr. Peacock will probably have a full tail back next year. My sister reports that he is already getting new growth, so maybe sooner? Stay tuned to PeafowlWatch here on The Merest Idea for the latest updates!

Posted by Rachel Dull at 9:24 PM No comments:

Email ThisBlogThis!Share to TwitterShare to FacebookShare to Pinterest
Labels: PeafowlWatch 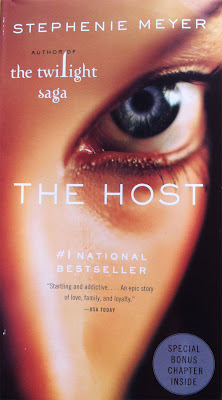 On a scale of 10pm to 4am, with midnight being "I gotta sleep, I'll finish this later" and anything after 4 being pretty much "I have to finish this before I go to sleep", I give this a 2am.

Stephenie Meyer knows how to write a compelling story! Say what you will about her female leads (and I will!), but she knows how to hook a reader by setting up impossible relationship dilemmas. Not too heavy on descriptions and packed with internal dialog—just the way I like it.

You can tell Ms. Meyer's sweet spot is this self-sacrificing female voice. And she loves a manly-man who can wrap his big arms all the way around a fragile woman. She also seems to enjoy a good sexually charged make-out scene amongst willing and loving partners. For my part, I don't mind the girly-girl/manly-man romance, but I would welcome a little character growth on the female's part away from being totally reliant on a fallible human (or unhuman) male, and towards being able to stand on her own. Wanderer (or Bella!) completely surrendering herself to attempt to save her man and others, though exhibiting the ability to make her own decisions, ultimately is just falling over and dying as opposed to resolving to make it with or without them. Meyer unapologetically commits to her agenda, though, so I guess I gotta respect that at least. I was glad Mel was more kick-ass, though.

Jared was my favorite character. I think his motives and views were well-described and interesting, and his actions in line with his character. He was emotional and not infallible, but calculating and decisive—a decent foil for Wanderer who wouldn't do anything to save her soul*.

I also enjoyed the pacing of the story. I was surprised that, despite it being a long book, at no point did I feel I had floated into the story doldrums. Actions and realizations compelled the plot forward and kept the wind in the story sails.

Lastly, I would have expected at least some baby drama from a group of humans living alone together in a cave for a long time. Did I miss the part where Uncle Jeb laid out the procreation rules, a la Tuvia Bielski in Defiance? Or had Jared eventually procured some condoms? At least Pet's body is mature enough to reproduce should Meyer need the offspring in the sequel to have long-lasting, cross-body love for Jared**, despite Jamie imprinting on it at birth***.

i learned how to make animated gifs! wheee!!!
Posted by Rachel Dull at 10:32 PM 1 comment:

Email ThisBlogThis!Share to TwitterShare to FacebookShare to Pinterest
Labels: kitty

Forget llamas and emus — If I had a million dollars, I'd buy you a peacock!

I visited my sister this weekend. Her neighbor keeps several peafowl that roam freely in the field behind their houses. Sometimes they strut by to say hello.


You would have thought we were at Malfoy Manor instead of along the interstate in semi-rural Kentucky!

Fun fact: The call of a peacock sounds like a distressed cat.

Tangential fact: This weekend I also realized and lamented the lack of a singular gender-neutral word for a bovine animal, other than cow (which technically means a female mother). Wikipedia articulately details this English language oversight and suggests "cattle beast" as the term I seek.
Posted by Rachel Dull at 10:53 PM No comments:

Email ThisBlogThis!Share to TwitterShare to FacebookShare to Pinterest
Labels: PeafowlWatch 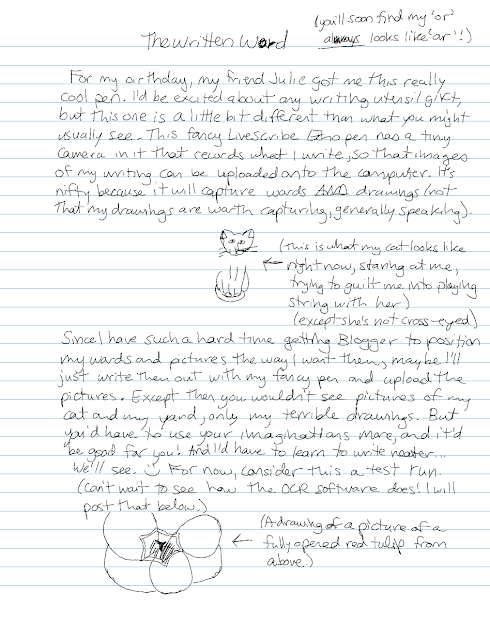 ((you'll soon find my 'or'
The written ward always looks like'ar'!)
For my birthday, my friend Julie got me this really
cool pen. I'd be excited about any writing utensil gift,
but this one is a little bit different than what you might
usually see. This fancy Livescribe Eeho per has a tiny
Camera in it that records what I write, so that images
of my writing can be uploaded onto the computer. It's
nifty because it will capture wards And drawings (not
that my drawings are worth capturing, generally speaking).
A- a
Itself (this iswhatmycatlooks like
. f-right now, stanhgatme,
(b*y) tyihgtoguittmeintoplajhg
string with her)
(except she's not cross-eyed)
Since I have such a hard time getting Blogger to position
my wards and pictures the way I want then, may be I'll
just write them out with my fancy pen and upload the
pictures. Except then you wouldn't see pictures of my
cat and my yard, only my terrible drawings. But
you'd have to use your imaginations mare, and it'd
be good for you! And I'd have to learn to write neater,,.
We'll see. I For now, consider this a test tun.
(can't wait to see how the OCR software does! I will
post that below.)
) (Adrawihgafapictuneofa
(j%j*E*f) <- saddened red top from
mm 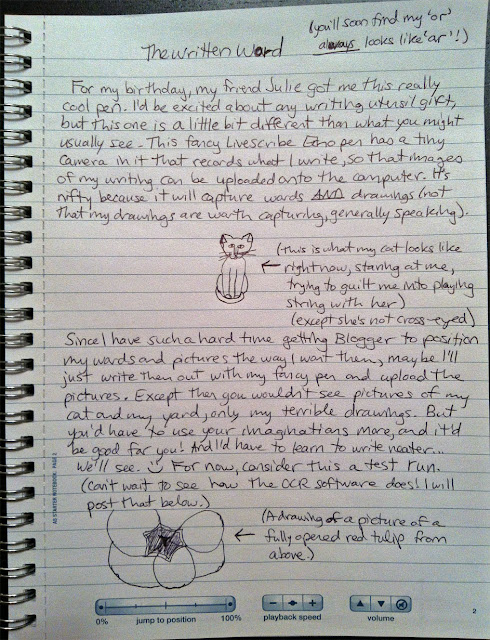 Posted by Rachel Dull at 9:20 PM No comments: