When Matt was invited to speak at a work conference in Vegas, I got excited about tagging along so that afterwards we could head out into the desert and see some stars. I'd been reading a book called The End of Night which had gotten me really geeked about dark places and preserving the ability to star gaze, even though I don't know anything about what stars I'm gazing at. I could think of someone who does, though, and thought my vacation experience would be greatly enhanced with his presence. With little more than a month's notice, I took a chance and emailed my astronomy-loving friend Josh whom I hadn't seen since grad school:

"What are the chances you and Kristen want to fly towards Vegas the weekend of May 2nd to drive out into the desert and look at stars and dirt and rocks and stuff? In my ideal world, you're looking at your calendar holding a wad of spare cash and thinking "gosh, it's been like 9 years since I saw those crazy Dulls--we should plan a trip in May to hang out with them!" In my slightly less ideal world, you're reading this email chuckling to yourself about my persistent ignorance and naivety in life, but you're a nice guy and so will at least set me straight on my star gazing plans. In my living nightmare, you agree to come but only if we stay at the Clown Motel. So give it to me straight: what kind of world am I living in?"

"I definitely would like to see those crazy Dulls and regularly wish they lived closer to us for hanging out. Game-playing, craft-beer-loving, home-ownering librarian-type couples being in relatively scarce supply. Well, get this. By coincidence it so happens we are going to be in Arizona for a trip to the Grand Canyon area right around the time you guys will be in Vegas. I am very scared of that clown motel."


I did my best to compensate for Josh's characteristic understatement by replying to his email with no fewer than 6 "omg"s. Las Vegas is a mere 4 hours from the Grand Canyon and Arizona is a perfect place to view the stars! Jackpot! Vacation plans quickly fell into place.

A little over a month later in a brew pub in Sedona, Arizona, we Dulls reunited with Josh, and met his fantastic wife, Kristen, for the first time. In addition to being enjoyable company, they are also excellent planners, and Matt and I pretty much leeched on to their vacation plans in lieu of researching our own (Librarian friends are so useful!). Over the next several days, we would meet up in Flagstaff to play games and drink local beers, and take a day trip together out to Walnut Canyon and Meteor Crater. We also stopped by the Lowell Observatory to view the moon, Mars, and Jupiter through the observatory's sizable telescopes. It all made for a great vacation! Click through to my Flickr album to see our pictures. 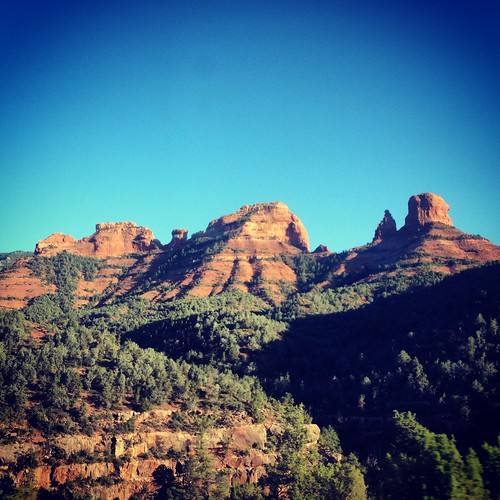 Posted by Rachel Dull at 5:14 PM No comments: