It was a rainy day so I decided to sew a pocket into a skirt I have been wearing a lot this summer. I hardly want to buy anything anymore WITHOUT pockets, but I still have plenty of clothes that I purchased pre-Pocket Awakening, and every time I wear them I wonder if there isn’t a way to just stitch a fold in there for my lip balm at least.


My first idea was to steal the pocket pattern from a pants patterned I already owned, but when I got out the pattern, I realized it was for cargo pants from the 90s and the pocket for those pants might be a bit much (seen below, on left). Instead I found a dress with a pocket that works well and traced its pocket onto a scrap of tracing paper I found on top of the sewing room garbage (seen below, center). Then I sat back in awe of the size difference and lamented that smart phones and cargo pants weren’t in vogue simultaneously. 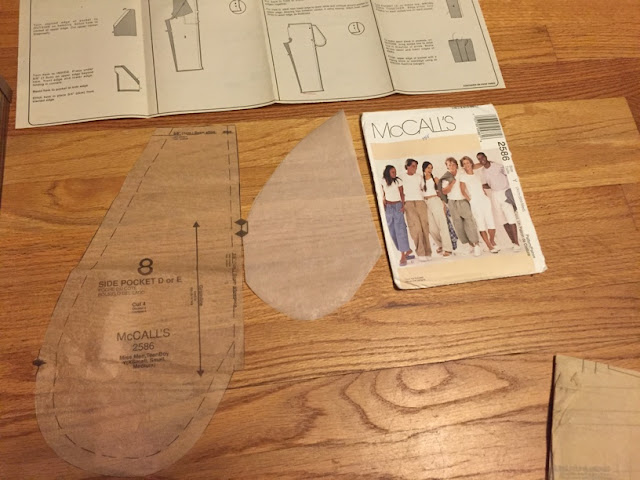 The fabric I used for my pocket fell off of the fabric shelf when I was pawing through the patterns. It is a piece of leftover muslin that happened to be the PERFECT size for one pocket. (My fabric shelves are a disaster right now and I often walk in to find fabrics in a heap on the floor. I think the cat tries to sit in there sometimes. But I wanted to be honest with you about how I make decisions while sewing, and more often than not it’s based on ready accessibility and chance.) 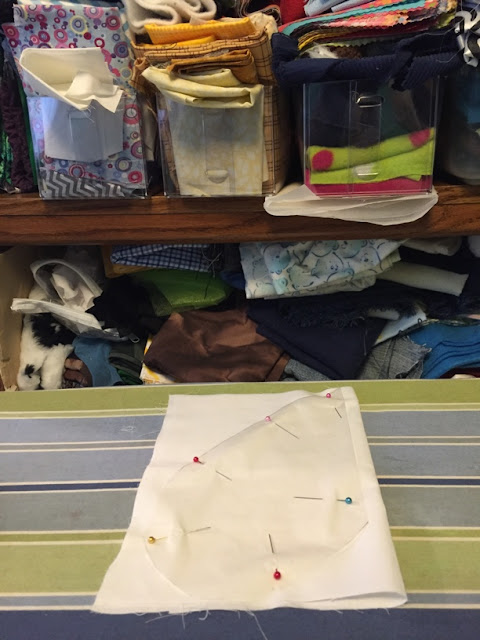 I ironed the muslin, pinned the pattern onto it, and then cut it out. 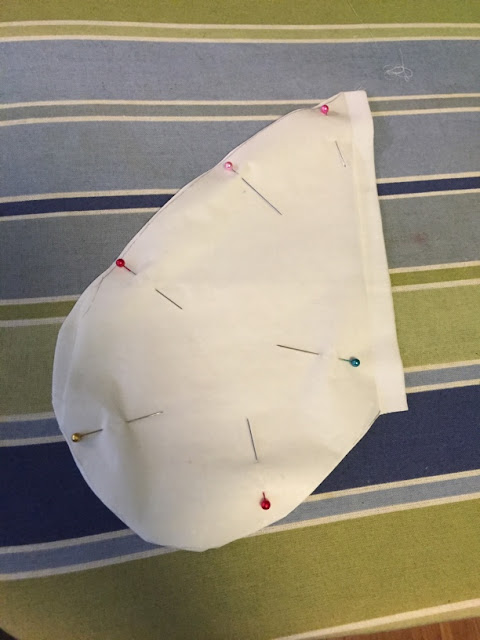 Next, I had to rip out the seam on the edge of the skirt where I wanted to place my pocket. I only ripped out a section just long enough for the pocket because, while it is easier to put in a pocket with completely detached front and back pieces of skirt, I didn’t want to take out the elastic and all that because I don’t like seam ripping THAT much. It had both a straight stitch and a serger stitch, so it took a little bit of work to get all the stitches out, but fortunately I am very experienced in seam ripper usage from many errant seams over the years. Running the seam ripper through the serged stitches worked pretty well. 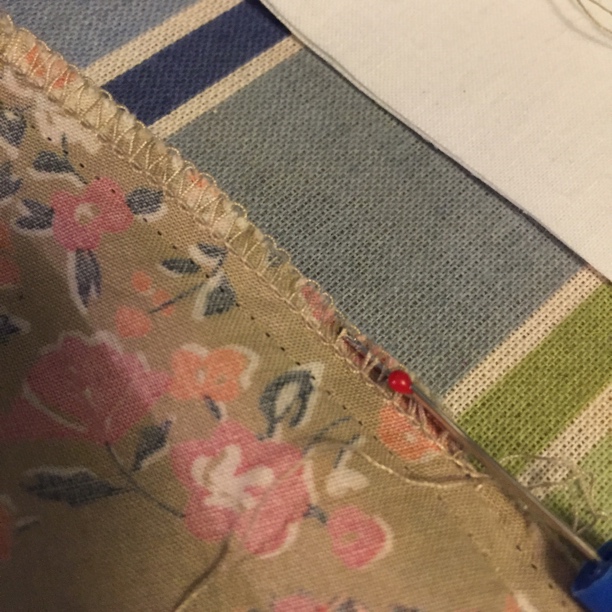 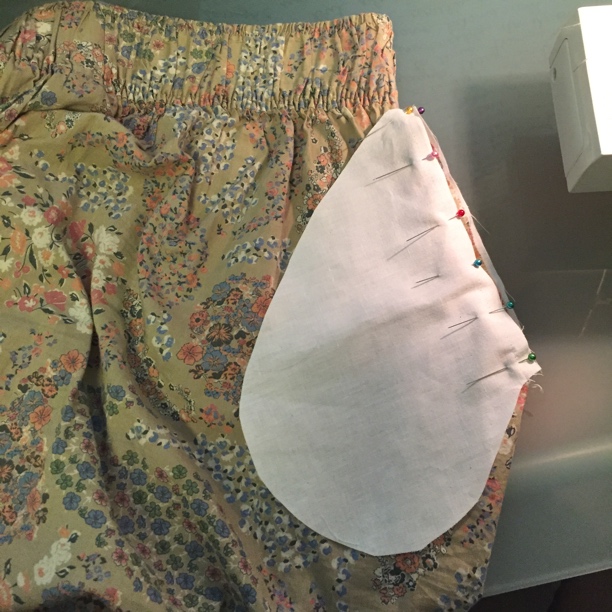 The next step was to attached the two sides of the pocket together. I turned the skirt inside out, aligned the two halves of the pocket, and pinned. I stitched around the outside of the pocket, also using a 3/8” seam allowance. (The bottom and the top where the stitches meet up with the side seam on the skirt are always a mystery to me when installing pockets, so I did my best and cleaned up the gaps later.) 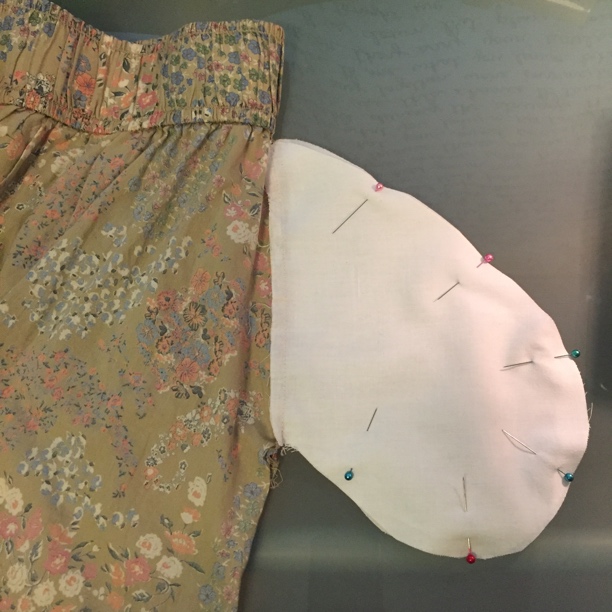 Finally, it’s the moment of truth! I turned the skirt right side out and tried it on. I was happy to find out that I had put my pocket on the right side even though I had forgotten to check when I started. I look forward to wearing this skirt again soon where I can keep my phone and lip balm close at hand throughout the day! 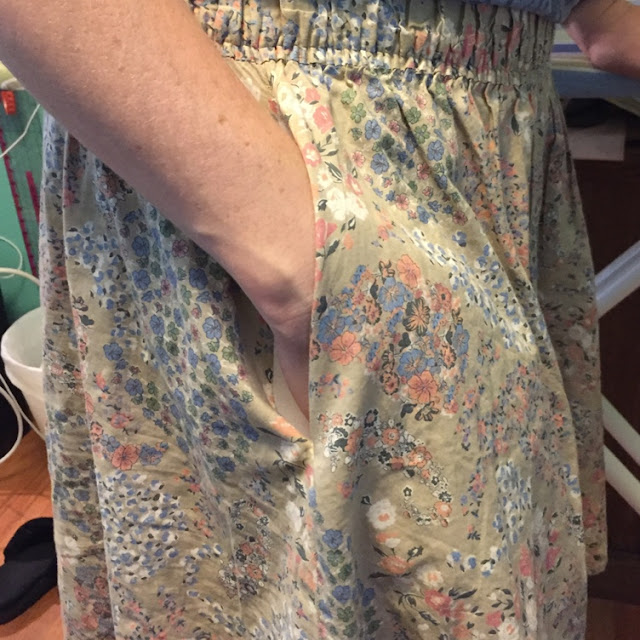 Email ThisBlogThis!Share to TwitterShare to FacebookShare to Pinterest
Labels: tutorial

They Sent Us to College

They sent us to college to get diplomas and jobs from which we could retire, but instead we got opinions and debt. We job hop and get laid off and change our careers every other year, eschewing the stability for which they worked their entire lives. They told us we could be anything so we wanted to try everything. And they probably feel let down by all this. They probably think they failed, and we’re failing, and we just don’t get it. But we feel empowered. We feel liberated. Like we really do get it. We get all of it. We are alive and making our own decisions. We are trying new things and changing our minds. We are free to be anything and think anything and marry whomever we please. But one day when our kids grow up and put into practice all the things we thought we were teaching them over the years, we’ll be just as surprised as our parents were with us. The things we valued will be cast aside as they grow into their own strengths, test their own ideas, and live the lives stretched out before them, full of promise. We’ll ask ourselves “What went wrong?” and “How can they live like that?” as we take refuge in the boxes we’ve built from our experiences and settle down on the securely anchored cushions of our worldview where it is safe.
Posted by Rachel Dull at 8:02 PM 2 comments: