It has been over three years since Matthew and I embarked upon the original Operation Pantry Purge in the fall of 2013. So much has changed in our food storage and buying habits! And yet I’m astounded by the number of foods that remained untouched and ever more inedible 3 years on.

For starters, we built out a mini-bar in the basement in 2014 and were able to move all the beer/alcohol to it’s own shelves/fridge down there. That made room for a bottled juice empire to grow up in its place. And in 2015 I started meal planning, which encourages us to buy only what we need for the week’s meals when we walk down the grocery store aisles.

Lest you think those big changes alone were enough to prevent disaster, let me just show you the “before” picture so you can see why it was time to purge again. 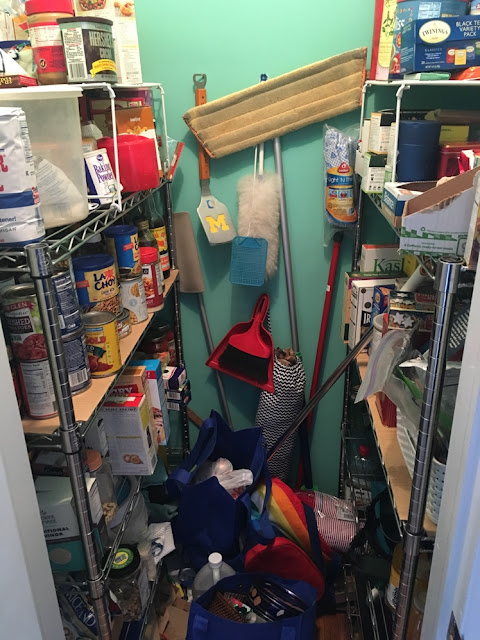 The tea situation was as bad as ever, and the stuff I hid in the closet during our NYE party needed to be sorted and dispersed. Plus I was getting annoyed at pawing through all the boxes of things to find what I wanted.

The purge redux was completed in two sessions and left behind a trimmer-than-ever pantry, now with room to keep coolers on the bottom shelf. I’m sad to say though that, while we are getting better at not being food hoarders, we aren’t necessarily retaining smartness. It wasn’t until I re-read the posts from the last purge that I realized we were missing an important aid in the evaluation process: beer! I’m not even sure I had a glass of water handy. I was just popping things in my mouth and suffering the consequences. If you are inspired to likewise purge your pantries, learn from my mistake. A bubbly swig of beer could do wonders to disinfect tastebuds tainted by spent oyster crackers. (Matt wrinkled his nose just tipping the bag into the compost bin. Why didn’t I think to use my nose before popping one into my mouth?)

We employed a shelf-at-a-time strategy to separate things into keep and “process”. (“Process” here means separate out compostable and recyclable parts for responsible disposal.) The most difficult thing I tried to process was a little container of concentrated liquid that is meant to be squeezed into water to make it flavored. This one was “iced tea” flavored, and continually peed brown liquid all over me the whole time I worked ever-so-dangerously with a knife to pry off its obstinate lid. The grape Gatorade powder that had become green and slightly malleable like old Playdoh while still maintaining that classic fake grape odor also was surprisingly difficult to process. I had to use a grapefruit spoon to scrape it from its recyclable container. Meanwhile, Matt was nearby unsuccessfully using a meat fork to stab at the hardened contents of an instant iced tea jar.


Do you remember the Snyder’s honey mustard and onion pretzel pieces from last time? Yeah, Matt didn’t either. They expired in September of 2013.

One of my favorite finds was a desiccated little potato. “Good word,” Matt said when I showed him the dusty skin before depositing it into the compost bin. 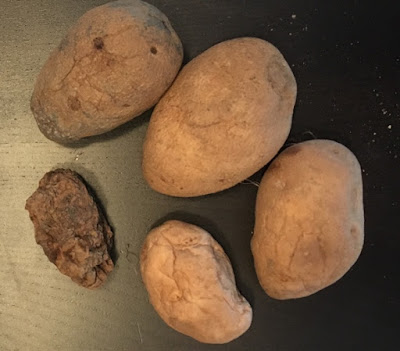 During that fall 2013 purge, we thought the cake mix that expired in November 2011 was probably still okay. But now 3 years later, it seems like we never really wanted lemon cake after all. Matt points to himself and pouts “But I did!” I take no responsibility for this. I toss the bag of mix into the trash and the box into the recycle. “Wait,” says Matt, “where are the scissors? I don’t like to confine things to death in plastic.” He cuts open the bag of mix and frees it from a sealed death.

The Kroger brand jello that expired in April ’02 doesn’t get a pass this time, either. Matt pleads innocence, saying it never sounded good (pineapple orange), but I know I’m the one who bought it. Matt does some math. “That’s before I even knew you!” Me: toothy grin.

An open box of Chick-Fri last good in 2008. What were we thinking last time? Simultaneously, Matt asks, “How did the minute rice survive when it expired in 2009?” To make us feel better about our past selves, he hypothesizes that maybe some items escape into a secret hiding place when the purge happens.

Upon examining a box of barbecue chicken seasoning mix, I realize it is full of bug holes and reflexively drop the box onto the floor. I pick it up and re-aim my drop over the trash bin this time. 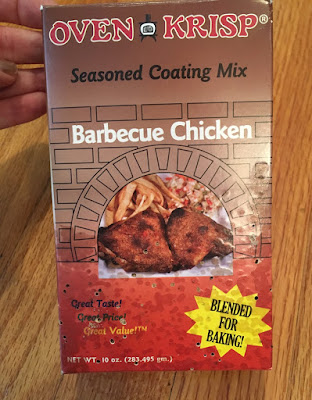 The beer bread mix with no expiration date was flagged for immediate consumption. I would guess it’s circa 2013. It smelled so good while it was baking! But, SPOILER ALERT, tasted like garbage. I don’t think it was the fault of the expired beer we used in it, but whatever, now that can of beer we never wanted and the beer bread mix we never ate are both gone. Hooray! And I bought some new self-rising flour so we can make fresh, tasty beer bread and right the wrongs we perpetrated on our senses.


With any luck that’s the last you’ll hear of our pantry, maybe ever! We’ll keep the flours free of bugs, and the jello manufactured in this decade, at least.