I did it! I ran 13.1 miles in one go—in the rain no less! The funny thing is, when you train for something, it kind of just feels like no big deal when you accomplish it, because it isn’t as hard as it seemed before you began training for it. I think I held onto the notion that it was going to be nigh impossible, or at least hellish, until maybe mile 6 of the race, at which point I lost track of how far I had come and how far I had left to go (because it is hard to slowly count to 13 over the course of 2 hours) and just enjoyed it. Yes, I know, it’s disgusting, but I actually enjoyed it, rain and all. 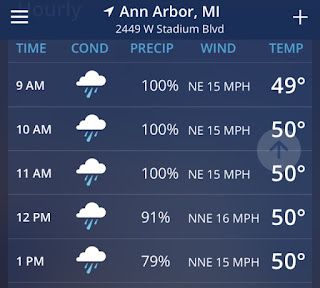 As of the Thursday before the race, the forecast was 60s and sunny. On Friday, I checked again and saw that my perfect race day weather had deteriorated to 50s and 60% chance of rain. By Saturday, it was low 50s with 100% chance of rain during the whole of the race. I began to panic. I had no idea what to do in those conditions as I had carefully avoided rain during the whole of my 7 week training. I googled all kinds of advice about running in the rain, texted my runner friend Yuri to corroborate my research, and just generally whined and fretted constantly for the next 24 hours that I would be miserable the whole time and I had no idea why I was doing this anyway. But I felt better as soon as I got to the starting line and saw what everybody else was wearing. I’ve never seen so many different ways to wear a plastic bag: in shoes, on head (shower cap?), with arms tucked inside, with arm holes cut out, cropped around the waist… Most people compensated for the rain not at all, or with these variously worn plastic bags. Very few people had on the rain gear I envisioned for myself and felt sure everyone else who was experienced would be wearing.


In the end, I was pleased with my own choice of clothing. My long-sleeve shirt retained some of my heat, but only a thin layer of water. It didn’t chaff. There was no question about whether I would wear my favorite running pants with pocket big enough for my phone, but when my underwear got soaked through, I sometimes had trouble getting all my wet layers to feel comfortable around my waist. I used a plastic bag to protect my phone, which was effective, but I only had a quart-size instead of a sandwich-sized one and so it sort of was too big. The obnoxious orange wool socks I chose were good for not chaffing or retaining too much water, and I pulled them up like a dweeb to cover the skin between my shoes and my pants. Having a hat was clutch, which kept my eyebrows dry and diverted water to drip off the bill instead of my nose.


Due to the cold and rain, my legs were numb from a very early point in the race, so I just ignored them and let them carry me in the current of the other runners. Being surrounded by moving people makes it easier to feel like you also should be moving. I was surprised to realize that at no point during the race did I think I wouldn’t make it—I’ve been on 3-mile runs and been convinced for 95% of it that I wouldn’t last—and I only really wanted to stop at Mile 11 because my right knee was tight and starting to hurt. Speaking of Mile 11, that’s about when everybody starts to pick it up and you are passed by people you passed miles ago. This was humbling, but my knee and my memory of the famous hill at the end kept me going my same steady pace.


According to the MapMyRun app on my phone, I was running about a 9:45 min/mile pace, but I was reaching the miles sooner and sooner before the official mile markers on the road, and in the end MapMyRun recorded my run as a bit longer than 13.1 miles. Hard to say why it was off from the official race time/distance, which put me at 9:55 min/mile. Either way, a good pace, and I hit my secondary goal of under 10 min/miles, which I honestly thought was a long shot (primary goal was just to finish!), especially in the rain.


The hill at the end did not impress me after all the hype (The 2nd-to-last hill on the other hand…). In any case, being able to see the finish line was very motivating. When I train, I just listen for the lady in my ear (i.e. MapMyRun) to tell me when I have completed my milage, so it was nice to have a fixed point to focus on, and I was able to dig deep to find some hidden strength to kick it up a few notches as I approached the line. Once I decide to do that, no one passes me anymore, and I’m that annoying person who swoops in and passes people at the finish line, not because I am attempting to beat them, but because they slowed down. What can I say, my Track and Field background taught me to leave it all on the track and push to the finish no matter the place. Plus it feels incredible to run fast (for short distances). If you are able, I encourage you to do it for like 3 seconds sometime. The wind on your face, the feeling of your legs cranking as fast as they can go… But seriously, why don’t more people sprint at the end? It’s like the best part.

My cheering section for the day was the brave duo of Matthew and Julie, who came out to cheer me on somewhere in the middle and who met me at the finish line with warm hugs and dry towels. It was a surprise and delight to see my loved ones mid-race, and a relief to be led to a warm, dry car at the end. If I hadn’t begun to feel a chill, I may have checked out the beer tent, and if the sun had been shining, we may have stayed for Taste of Ann Arbor so I could have worn my finisher’s medal around town with pride, but alas. I have no plans and no expectations of my future running/exercise goals right now, but maybe I’ll be back next year. Hard to say. Watch this space for more details!